The inspiration for Idelica comes from Emma’s father’s side of the family, and childhood memories of life in Abuela’s kitchen. Ana Ruiz married Fisherman Simon Lopez in the 1940s. They set up their home in the La Chanca quarter of Almeria in Andalusia. They had seven children and consequently most of Ana’s days were spent between haggling at daily markets and crafting dishes in her kitchen, with the occasional spoils of Simon’s latest deep-sea catch thrown in. The demand for feeding didn’t stop when her children grew up and brought friends, spouses, grandchildren, and then great grandchildren to the matriarchal family home, often landing en masse and unannounced. Abuela (Spanish for Grandma) always had something wonderful (and sometimes weird) boiling, griddling, frying, baking, chilling or air-drying in the kitchen with enough to satisfy everyone. It’s remarkable that most of the population in Spain lived their whole lives in poverty throughout the 1900s, yet they are now a nation best known for the generous and sharing nature of their gastronomy.

Miguel Lopez Ruiz, middle child of Ana & Simon and a young waiter in Mallorca in the 1970s, met and married a young English cabaret dancer called Diane Pope. They settled in the UK to raise their two daughters, Emma and Jessica, but family holidays were always spent in Almeria and the fondest memories are all about family, feasting and fiestas.

The streets of Spanish towns like Almeria in the evenings of the Summer Fiestas are lined with people sat or stood, chatting and laughing, even singing and dancing, having drinks and digging into one Tapas after another. Unlike most other Spanish towns in these times, the Tapas in Almeria is still complimentary with the order of a glass of wine or beer, rumoured to have evolved from the habit of Spanish Bar owners placing bread and cheese or ham over the glass to keep the flies from crawling into their alcoholic beverage! Lots of bars have a Tapas speciality they are popular for alongside a daily selection and the waiting staff take massive pride in never dropping an order no matter how complicated it gets. People who are extra choosy might end up visiting three or more bars in one evening to get the best of everything in town. Andalusian Tapas is highly regarded in Spain with many rich and earthy dishes heavily influenced by the spices brought in during the Medieval Moorish occupation. In 2019 Almeria itself was awarded the title of Gastronomic Capital of Spain by the Spanish food and travel industry. 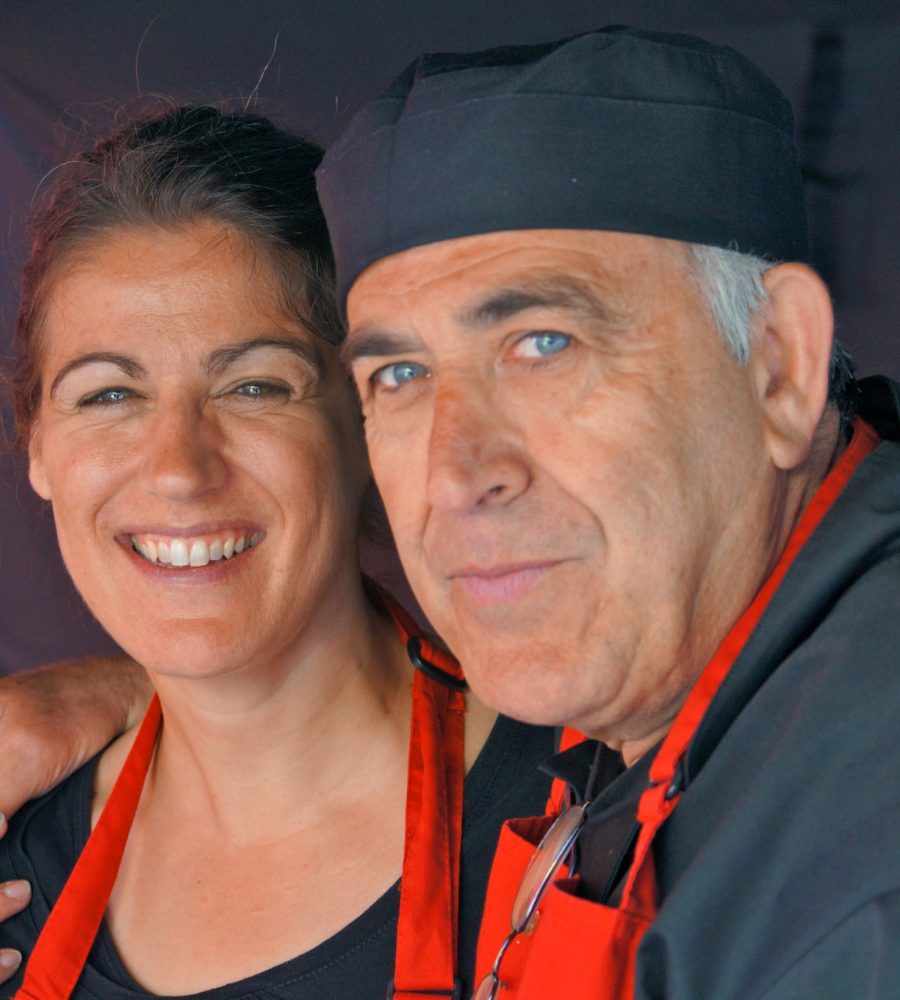 Idelica was set up by Emma Lopez in 2010 with the intention of finding ways to bring this warm-hearted and decadent food culture from Almeria to people in the UK. Emma was born in Bournemouth, moved to London after University and worked in Publishing before becoming a Mum in 2005. After moving to be closer to her family again, she started the business in Sopley (Dorset) in the retail of Spanish fine foods and paella kits and meant to keep things small while her son Tom was at primary school.

The premises was moved twice since then along the Dorset/Hampshire border to Avon and finally to St Ives near Ringwood (Hampshire) in 2017. During that period, Idelica had branched into catering and developed an excellent reputation for big pan paellas at various local food festivals. Encouraged by Dad (Miguel) she introduced other Spanish dishes to the festival menu. In 2012 Idelica began to cater at the odd private party and then a wedding in 2013. Almost exclusively by word-of-mouth, demand for Private Catering has been increasing steadily since.

To keep up with demand, Emma’s fiancé Ian Roberts had started helping out at events in early 2019. Ian and Emma shared a strong feeling that Spanish cuisine lends itself perfectly to the many sharing-style and festival-feel types of catering that has become so popular among brides and grooms and other celebrants of events large and small in the UK.

Ian took the directorial reins in early 2020 – and galloped headlong into more chaos than anyone could ever have dreamt of. With the global shake-up that began with the March lockdown, we came to realise that it is important to focus on what (and who) you love, do what you can and appreciate what you have. We were forced to shelve our business plans for growth and joined the many other small local businesses that were working hard to stay afloat and navigate the ever-changing restrictions.

We held on tight until events were allowed again in 2021 and happily now we are back doing what we love with gusto! Idelica survives and thrives on the efforts by real people for real people striving to be happy and making sure others are too. To bring out the best in Spanish cookery we are passionate about every single dish we make and serve, whether it’s a tiny bite of tortilla or a metre-wide pan of paella. To enjoy our Spanish catering at its best you just need to trust us to indulge you and your guests Almeria-style.

I am Francisco Vasquez Garcia
I am welcome to Almeria
We have sin gas and con leche
We have fiesta and feria
We have the song of the cochona
We have brandy and half corona
And Leonardo and his accordione
And calamari and macaroni
Come all you rambling boys of pleasure
And ladies of easy leisure
We must say Adios! until we see
Almeria once again.
‘Fiesta’ Song by The Pogues

Apart from the Spanish heritage, Founder and Director Emma loves food and loves people, so making a business from feeding people was a no brainer when the opportunity arose. From day one, the quality and integrity of the dishes that were served up was so important that, despite being a tiny microbusiness back then, she went to the trouble of importing ingredients directly from Spanish suppliers rather than risk having to use the wrong type of rice or chorizo that was a bit meh. With the increase in popularity and choice of Spanish ingredients in the UK she can now be more experimental. And now that much of the business (including the purchasing budget!) is being taken care of by others she can be more focused than ever on the continuous development of our unique feast and fiesta foodservice and menus. She’s like a child in a sweet shop – and paradoxically is now an Abuela too with the birth of hers and Ian’s first grandchild Evie in 2021. Ian joined Idelica full time as co-Director in 2019. Alongside the experience he brings from a long career in business transformation, it is his passion for quality food and delighting our customers that is most important to where Idelica is today. Whilst he loves his spreadsheets – God knows he loves his spreadsheets, please save us from the spreadsheets – he has also embraced the Spanish culture of food and is committed to providing excellence in the quality of both the food and service that Idelica offers. Moreover, Ian has a guitar-toting, belter-singing alter-ego called ‘Baldy’ who you may see performing in his unmistakeable style at local pubs – just don’t give him a microphone at your event or you will never shut him up! Steve is our seasoned ‘Maître De’ Service Lead who can bring about a feeling of ease in the most nervous host or reluctant relative whatever the event or circumstance. He is a proper people person who strikes empathy easily with customers and colleagues alike and uses it to meet everyone’s needs and pace the event proceedings perfectly. He is also highly practical and has strong sight for the big picture as well as the detail. No job is too much for him – though he has often said on a pack-up that he would prefer we traded in pillows rather than giant paellas. He’s also extremely funny, smart, gorgeous, sexy, modest and apart from people he loves bikes, dogs and pork scratchings. Sandra brings magical cookery skills, meticulous organization and straight-talking Brazilian charm to every event she works on. She will leave no stone unturned on a cook until the paellas, pizzas or tapas dishes are done to perfection. And when that’s done, she will not rest until everything in a one-mile radius is cleaned within an inch of its life and packed away. When a new dish arrives on our Menu, she can’t wait to try it out. She is kind, fun-loving, stylish and enjoys a challenge – and we don’t know which but at least one of these reasons must be why she married Steve! Elsa has a talent for taking anything that we throw at her and making it work for Idelica. Her Portuguese parents, their classical training in foodservice and the successful careers they followed in High End Private Catering in London in the 1970s – 90s have clearly influenced Elsa. But more importantly she is a dependable, resourceful, hard-working, supportive and dedicated team member both in front and at back of house. In between working on events with us she sews and sells Posh Wedding Dresses at a London Bridal Boutique – don’t ask us how she does all of this and still has the energy to be so cheerful!

They say that good things come in small packages, and Pauline packs a lot of good things into hers. Eager to learn about everything and keen to get it all working like clockwork, she won’t ever sit still if there is still something that needs doing. She has impeccable taste in Marks and Spencer’s biscuits, and we support her in this by eating through the packs she often brings on shift. She enjoys gardening, salsa dancing and caring for other people a lot. She’s been working on events for one season, but it feels we’ve known her for a lot longer – for good reasons! The delightful Rosie joined Idelica in 2021 working on paella our stand at the Southampton Boat Show. She enjoyed serving paella to all the happy customers and experiencing first-hand what to do when some-one’s hungry young Golden Retriever decides to try leaping into the pan! Rosie is an avid sailor and mountain biker, never happier than when out on the sea or cycling in the New Forest in all weathers! We are looking forward to having her join us on some more private and public functions this year and beyond – and by managing to be both highly creative and methodical she has lots to offer alongside the rest of our growing team. Graeme is our newest addition to the family, joining us for 2022 and showing a willingness to try new things and help where we need it most. We are also blessed to benefit from his artistic skills to ensure that all our branding is cool and consistent, and we are all in complete awe of his musical prowess which is realised in the form of his alter-ego Coosticks. With his bright, breezy and fresh attitude, Graeme is a perfect fit within the Idelica team. Join up to receive information on discounts and notifications of events.